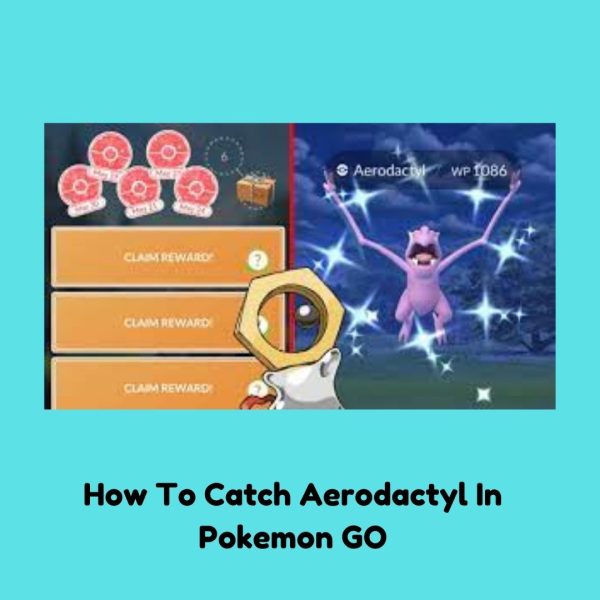 It has light blue-grey skin on its body and violet wing membranes. And It can grasp objects with its clawed hands at the end of each wing.

Other than that, It has a hump-like ridge on its back with a spike, and it has a strong tail with an arrow-shaped tip. Its talon-like feet have two toes in front and one in back and can scoop up and tightly clutch its prey in flight.

This flying Pokemon is one of the oldest in the series, first appearing in Generation I. As a result, it is also one of the more well-known Pokemon.

This makes it a common feature in many Pokemon games, including Pokemon Go. However, there has recently been a problem with attempting to catch it.

When you try to catch it, the Aerodactyl will appear to be too high up for you to catch. As a result, all of your Pokeballs will be unable to make contact with the Pokemon.

We don’t need to say how aggravating this can be. But don’t worry, there is a solution, and it can be found in this How to Catch Aerodactyl in Pokemon Go guide.

Read More : How to Unlock Costumes in Cookie Run Kingdom

How to Catch Aerodactyl in Pokemon Go

There is no doubt that catching an Aerodactyl is a difficult task. However, catching one is required to complete the eighth challenge in the Let’s Go, Meltan research task.

When you complete this challenge, you will gain 4000 XP and move one step closer to the final set of field research tasks.

In Pokemon Go, you can catch an Aerodactyl in a variety of ways. If you’re new to the game, you can complete a specific field research task, which will reward you with a highly desirable Pokemon.

There are also some unconventional methods for catching Aerodactyl in Pokemon Go. Among them are catching one at a specific spawn location and hatching 10KM eggs.

We’ll look at all three of these methods in the following sections. These methods will show you how to catch an Aerodactyl in Pokemon Go.

The simplest way to catch an Aerodactyl is to complete a field research task. It only takes 5 raids to get there. If you complete this task successfully, you will be rewarded with an Aerodactyl.

This is a sure-fire method for catching this Pokemon. The Aerodactyl is a rock-type Pokemon, and there are some specific real-world spawn locations where you have the best chance of catching it in the wild.

There are seven different types of Pokemon, with the Aerodactyl ranking second. It clearly states that it is one of the rarest Pokemon in the entire game.

This doesn’t mean you won’t be able to catch one in the wild; it just means your chances are greatly reduced. Despite this, you will be able to catch an Aerodactyl in areas designated in the game as farmland and nature preserves. Farmland is your best bet.

Those are the tips on How to Catch Aerodactyl in Pokemon Go. As we already said in the article, catching aerodactyl might be difficult since it is one of the rarest pokemon that exist in the game.

However, if you follow our tips, you will eventually get your own aerodactyl. Good Luck!