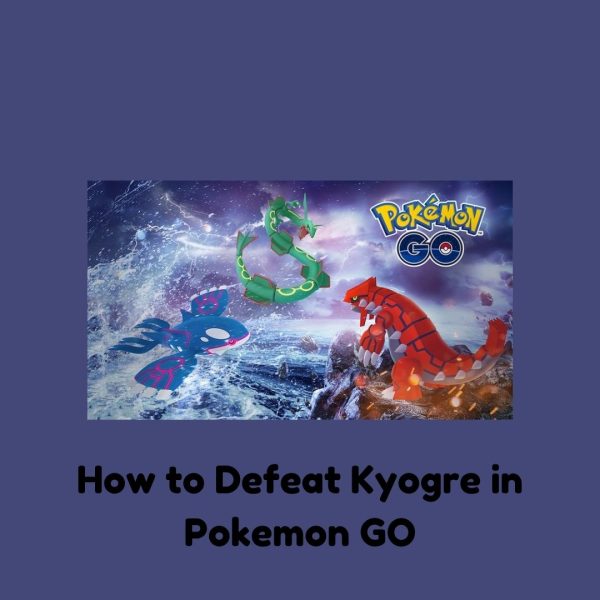 How to Defeat Kyogre in Pokemon GO?

Kyogre’s only weaknesses as a pure Water type are Grass and Electric. It has the ability to deal Water, Electric, and Ice damage. Previous Raids relied on Electric type counters because its Ice type move is extremely effective against Grass type counters.

However, with the introduction of Mega Evolution, competitive Grass-focused strategies are now available if you can coordinate the use of Mega Pokémon.

In a vacuum, Zekrom is the most effective non-Shadow Pokémon against Kyogre. Zekrom, the mascot of Pokémon White, is a Legendary Pokémon that has only appeared once in Raids and during a global pandemic, so many players don’t even own one, let alone the Candy to power it up.

Even so, if you have it, it can withstand Water and Electric attacks while taking double damage from Ice. The moves you’ll want your Zekrom to know are Charge Beam and Wild Charge.

Read More: How to Beat Regice in Pokemon GO

Grass types are generally vulnerable to Kyogre’s Blizzard. However, Mega Venusaur’s boosted stats make Mega Venusaur one of the top contenders in this Raid.

Mega Venusaur is an excellent choice if you are unable to coordinate with your fellow Trainers or are certain that the Kyogre you are facing does not know Blizzard. The moves you’ll want your Mega Venusaur to know are Vine Whip and Frenzy Plant.

Raikou, one of the three Legendary beasts of the Johto region, is an excellent counter to Kyogre. It’s been available numerous times in events, Raids, Research Breakthrough Rewards, and even as a Shadow Pokémon captured by Giovanni, so most players already have one or two powered up.

It resists Electric type attacks and has no weaknesses that Kyogre can exploit as a pure Electric type. For this Raid, you’ll need your Raikou to know Thunder Shock and Wild Charge.

Read More: How To Evolve Porygon in Pokemon GO

Thundurus from Generation V is an excellent counter for Kyogre, particularly Therian forme Thundurus, due to its higher attack stat and better moveset. Because it is an Electric and Flying type, it is extremely vulnerable to Ice type moves, so be wary of Blizzard.

It’s also less common than the Incarnate forme, but since the two share Candy, powering it up shouldn’t be a problem. If you’re bringing Thundurus, it should be familiar with Volt Switch and Thunderbolt.

5. How many players does it take to defeat Kyogre in Pokemon Go?

Two high-level Trainers can defeat Kyogre with the right counters and moveset. However, this is heavily reliant on Kyogre’s movements. Grass type counters will simply not last if Kyogre has Blizzard.

If you can’t coordinate with your teammates, are a lower level, or are up against a Blizzard Kyogre, you may need four or more Trainers to defeat it.

That’s all there is to it for How to Defeat Kyogre in Pokemon GO. We’ve already given you a lot of information on how to defeat Kyogre.

You can use our recommended counters for Kyogre and change the number of players required in the raid battle. Continue to play, and you will eventually defeat and obtain your Kyogre.