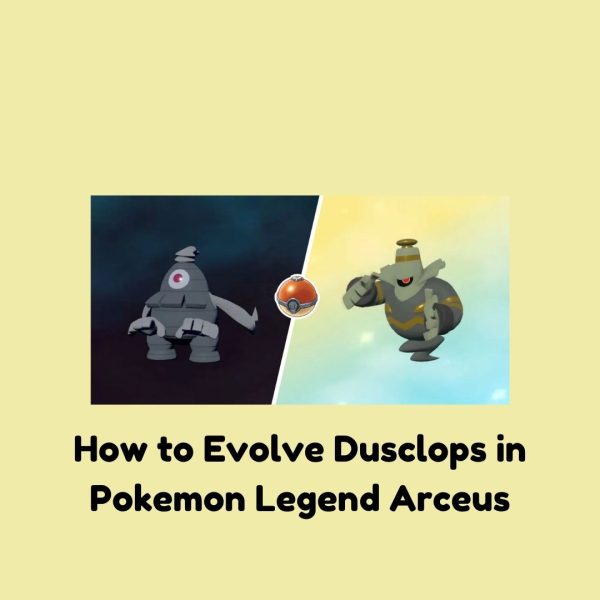 How to Evolve Dusclops Pokemon Legend Arceus – In Pokémon Legends: Arceus, Dusclops is a Ghost-Type Pokémon that evolves into Dusknoir when given a particular evolution item. The Beckon Pokémon can be found in the Cobalt Coastlands and the Alabaster Icelands, where it can spawn naturally.

Trainers can find Dusclops in the Cobalt Coastlands’ Deadwood Haunt. Dusclops spawns in various areas all across southwest of the Alabaster Icelands in Pokémon Legends: Arceus, including the regions of Avalanche Slopes and Arena’s Approach.

Furthermore, both Dusclops and Dusknoir can be found during random Space-Time Distortions in the Coronet Highlands. In this article, we will tell you How to Evolve Dusclops Pokemon Legend Arceus. Read the detailed information below.

How to Evolve Dusclops in Pokemon Legend Arceus

In Pokémon Legends: Arceus, players must give Dusclops a Reaper Cloth to evolve it into Dusknoir. The Reaper Cloth is an extremely rare evolution item in Arceus which can be acquired in a variety of ways. To begin, players can collect Lost Satchels throughout Hisui and exchange them for Merit Points, that can then be used to purchase Reaper Cloth from the Trading Post for 1,400 MP.

Read More: How to Get Ursaluna in Pokemon Legends Arceus

How to Get Reaper Cloth in Pokemon Legend Arceus

Given that players only earn 50-100 Merit Points per Satchel, it’s a hefty price to pay. Second, Ginter of the Ginkgo Guild Shop may offer Reaper Cloth at random for 10,000. The Special Item will be referred to as the “Mysterious Cloth” by him. Remember that this deal will be available unless players catch 20 Pokémon, at which point Ginter will sell another Special Item.

Another option is to find a Reaper Cloth on the ground during a Space-Time Distortion event. This strategy, like Ginter’s Specials in Pokémon Legends: Arceus, is based entirely on RNG, making it unsustainable. Furthermore, Dusclops and Duskull have an 8% opportunity of spawning while carrying their own evolution item. Eventually, after collecting 70 Wisps, Trainers can obtain the cloth from Vessa.

When players have acquired the Reaper Cloth, they can use it to evolve Dusclops into Dusknoir, a Ghost-Type Gripper Pokémon. To make the most of its high Defense stat, players should feed it Mints to give it a Relaxed Nature.

Read More: How to Change Moves in Pokemon Arceus

Those are the simplest way on How to Evolve Dusclops Pokemon Legend Arceus. You can easily evolve Dusclops if you follow the steps that we have provided above. Good luck on your try and we hope you get your Dusknoir soon!