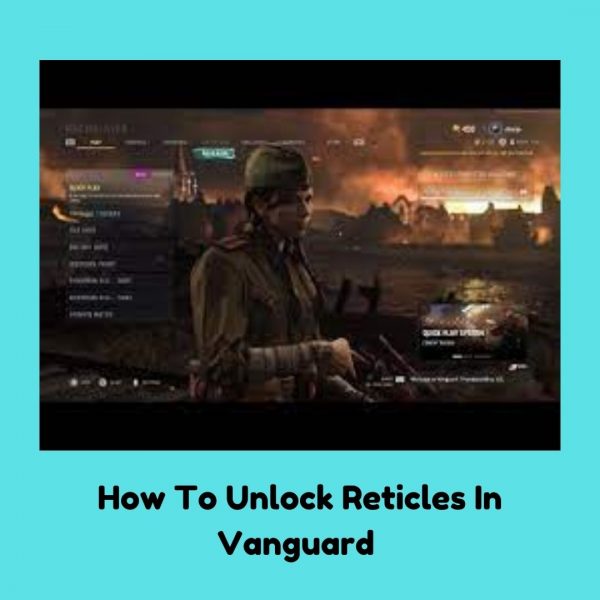 How To Unlock Reticles in Vanguard – Vanguard, the latest Call of Duty installment, is now available. Call of Duty: Vanguard is a first-person shooter game released in 2021 by Activision and developed by Sledgehammer Games.

On November 5, it was released for Microsoft Windows, PlayStation 4, PlayStation 5, Xbox One, and Xbox Series X/S. It is the 18th installment in the Call of Duty series and the follow-up to Call of Duty: WWII.

It establishes a storyline centered on the formation of special forces to combat an emerging threat near the end of World War II in various theaters.

Cosmetics are extremely important in the COD series, as one might expect given the fast-paced action.

Fortunately, they haven’t lost touch! Unlocking new reticles, camos, and other weapons will be a lot of fun. Therefore, in this article we will tell you how to unlock reticles in vanguard CoD.

How To Unlock Reticles in Vanguard

To unlock reticles in Call of Duty: Vanguard, you can either buy cosmetic packs or finish weapon challenges that contain the cosmetic.

Also Read : How To Turn On Voice Chat In Roblox 2021 Mobile

COD Points can be redeemed for items in the in-game store as well as the Battle Pass. As you advance through the ranks, remember to stop by the store every now and then.

You might get lucky and come across an awesome reticle in the store or through the battle pass itself.

If your reticle demands a weapon challenge, you can complete it in either multiplayer or Zombie mode.

It will be determined by the difficulty of the task. Some challenges will demand you to have a certain weapon level in order to complete them.

Before filing a bug report, make sure you’re in the correct mode and at or above the weapon level!

Anybody out there experiencing issues with the reticles not unlocking correctly in Call of Duty: Vanguard should contact Activision Support to report the bug, as there is currently no other solution for the reticle challenge not tracking correctly.

At the time of writing, many players had made complaints that despite completing the challenges, they were unable to unlock the reward. This bug isn’t limited to reticles; players are also having problems with the camo challenges.

Sledgehammer Games is aware of the problem and is working on fixing it. You can report this bug until then on their Support page. Aside from that, the only thing you can do is wait until this problem is resolved.

That’s all there is to learning how to unlock reticles in Vanguard. As can be seen, the steps are fairly simple and straightforward.

Simply follow the instructions to the letter, and we guarantee you’ll be able to unlock reticles in Vanguard after reading this article.

Keep in mind that there may be some bugs and glitches in the game. If you encounter a problem, don’t forget to report it. Enjoy the game!